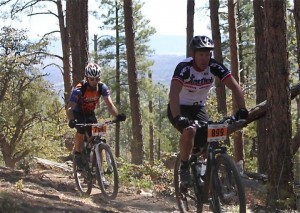 The race this last weekend was in Globe, and I have to say that we were hearing nothing good about the race course. I Really had no desire to go, but being in the lead for the state championship, combined with the fact that I also represent AGGRESS meant that I needed to go anyhow. After getting up there on Friday, I could tell the course was nothing for than some dry-loose forest service roads (That werent in the forest). On top of that everybody said that there was a half mile of the course that ran in the bottom of a creek bed that had 8 – 10 inches of dry loose sand in it…..OUCH! Well, Saturday was hot and dry, and by the time we started at 11 oclock, it was 90 degrees and blowing wind. I went into this race, fully expecting to win it, but I knew I had my work cut out for me with Mike Haas (Exhale bikes). Nonetheless, I have beaten him twice, and felt I would beat him again, as long as there was enough climbing……….there wasn’t. Mike and I jumped off the front, and were content to ride together for a while. I told Mike we would have a gap after the first two short, steep climbs, and we did. The problem was that after that we were exposed on the top of a ridge for about 4 miles straight into a headwind. I could tell that I was running the wrong gear (20t), and Mike was running the right one (18t). We rode together, and I tried to hide it, but once we hit a long section of semi-downhill on the back side of the course, he could tell that I was spun out, and away he went! I tried like heck to close the gap before we started our second lap, but it was so hot, I was burning up! I could tell part way into the second lap that I just wasn’t going to catch him because of the long flat, so I was content with the gap we had created, and decided to ride for second. Even this wasnt easy, because I just couldn’t ever get recovered, and I ran out of water right after rolling through the venue the second time! Bummer! I knew I was drinking a lot….Welp that meant the last nine miles were DRY. Can you say leg cramps! Nevertheless, I was able to finish in second place, and maintain my lead in the series, but I have to say, I was very dissapointed in my performance. Of course, I had the 4 hour drive home to analyze every aspect of my riding, and what I can do better…….Then I realized that this is my first race season, and I might want to back myself off the intensity scale just a wee bit, and remember that riding and racing bikes is FUN!!!!! – Aaron